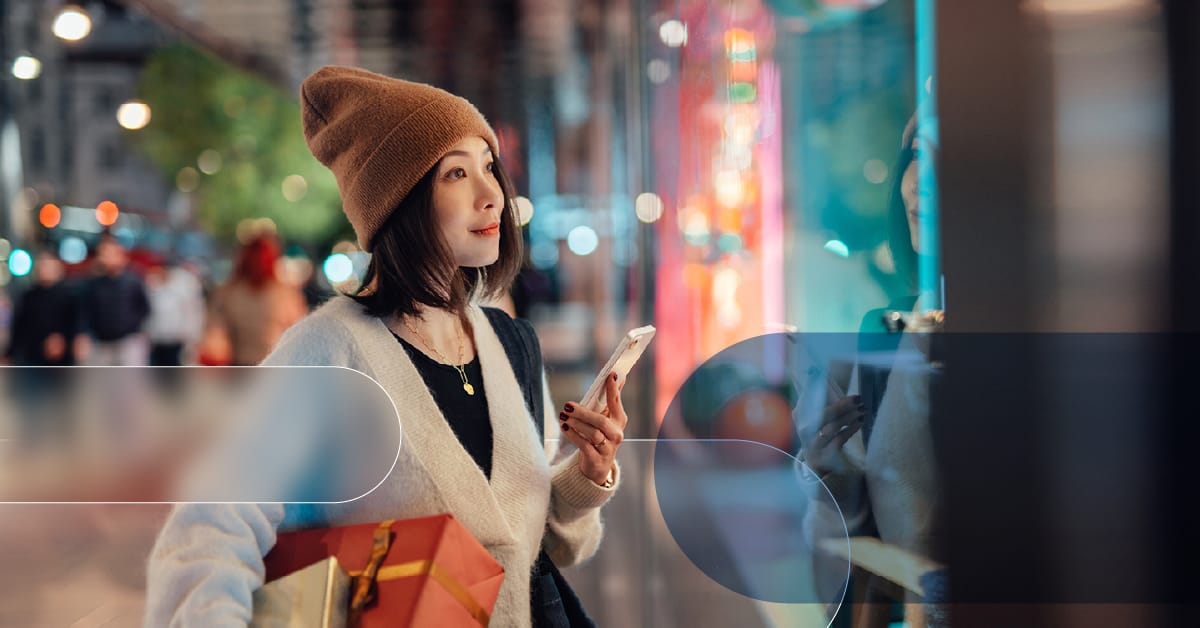 Explorations in the spam folder–Holiday Edition

The spam folder: that dark and disregarded corner of every email account, full of too-good-to-be-true offers, unexpected shipments, and supposedly free giveaways.

You’re right to ignore this folder; few good things come from exploring it. But every once in a while one of these misleading, and sometimes malicious, emails manages to evade the filters that normally siphon them off, landing them in your inbox instead.

Fortunately, it’s easy enough to spot these emails if you know what to look for. We’ve investigated this folder once before, showcasing a variety of scams. With the holiday season in full swing, we thought this would be a good time to revisit how scammers are trying to trick unsuspecting users.

The holiday season is traditionally a time when this type of activity increases, and this year is no different. According to research published by credit reporting agency TransUnion, the average daily number of suspected digital fraud attempts was up 82 percent globally between Thanksgiving and Cyber Monday (Nov 24–Nov 28) compared to the rest of the year (Jan 1–Nov 23) and 127 percent higher for transactions originating in the US.

This level of activity makes it all the more important to be aware of these scams. With that in mind, let’s dive into the spam folder to get a picture of the types of campaigns currently circulating.

A word of caution

While much of the spam circulating is innocuous, many emails are phishing attempts, and some are indeed malicious. To explore these scams, we used a dedicated computer, segmented from the rest of the network, and leveraged Cisco Secure Malware Analytics to safely open the emails before clicking on links or opening attachments. The point being, we do not recommend doing this at home.

10 questions for an amazing gift

By far, the largest category of spam we saw were surveys scams. According to these emails, if you fill out a simple survey you’ll receive “exclusive offers” such as gift cards, smartphones, smart watches, power drills, or even pots and pans. 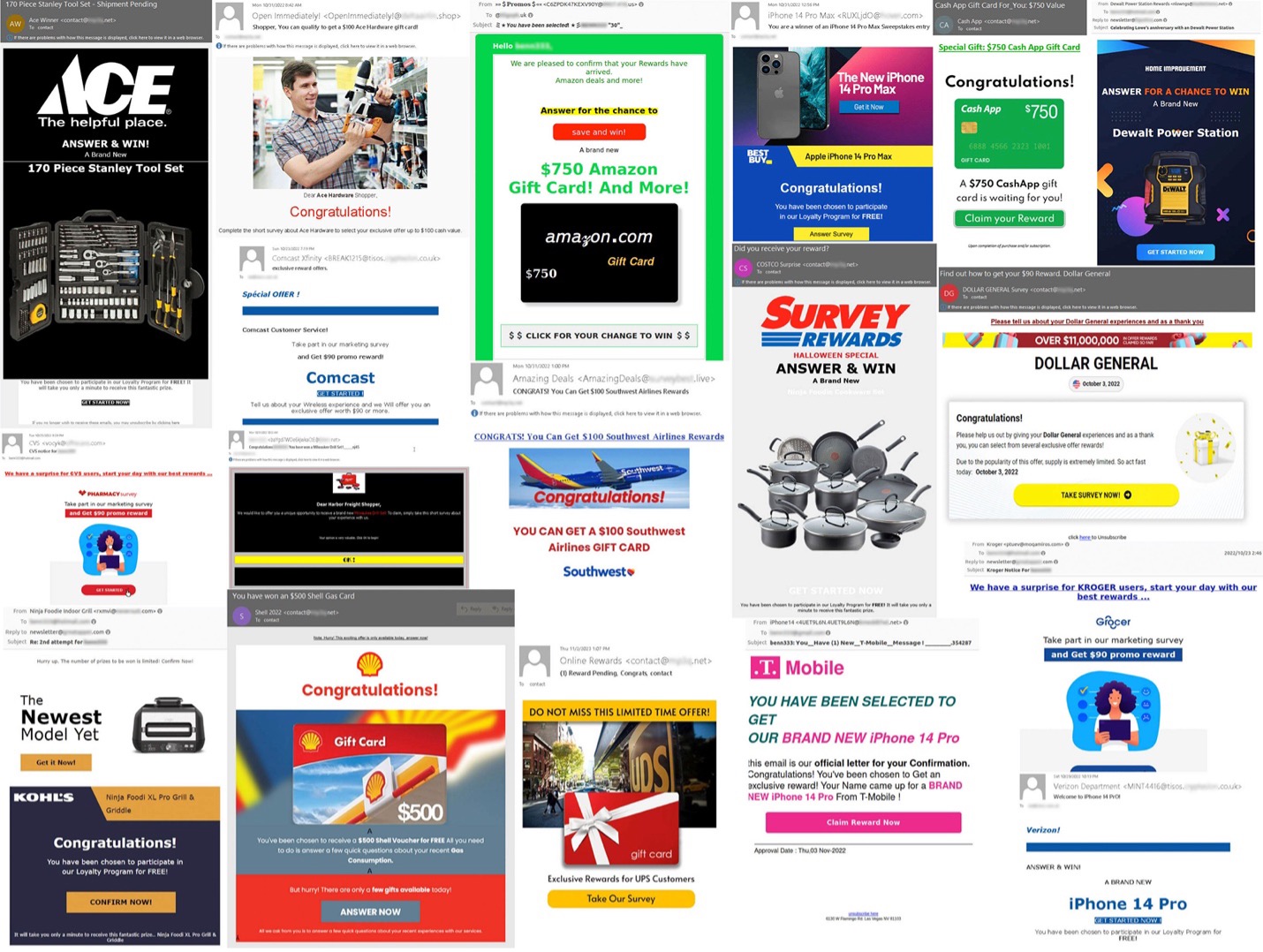 There are even some campaigns that specifically target the holiday shopping season. 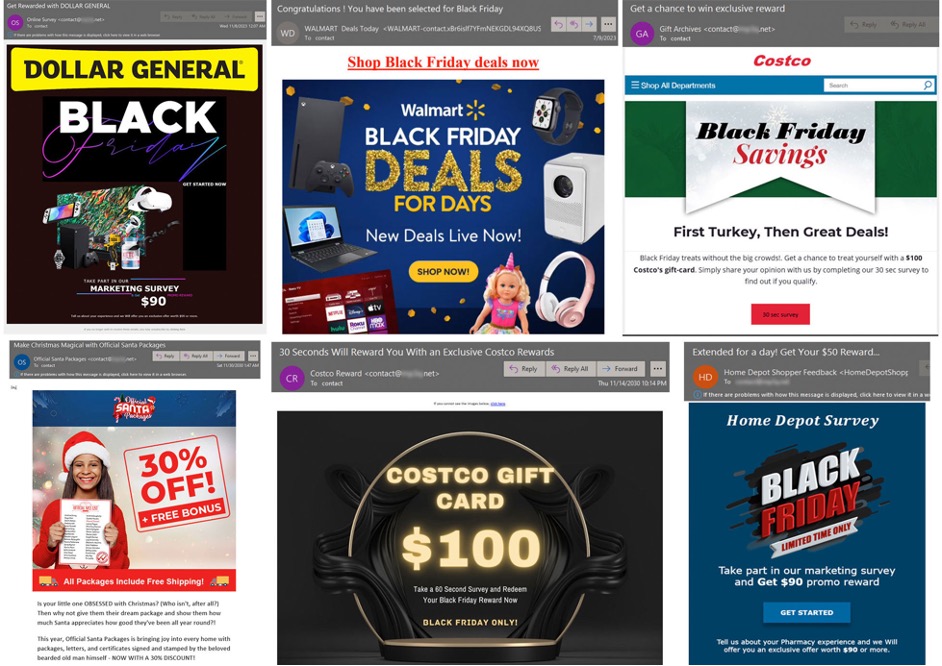 Clicking the links in these emails takes the recipient to sites where they are asked to fill out a survey.

These pages often include fake testimonials that say how easy the survey is and what they did with their free gift. 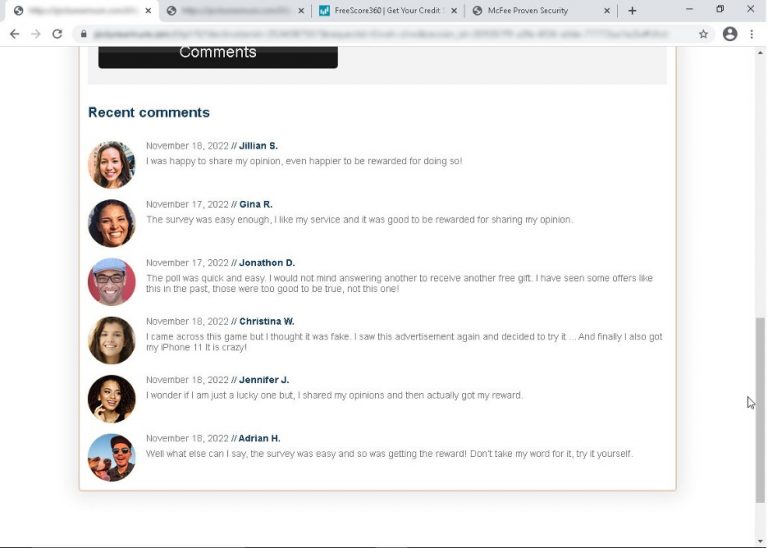 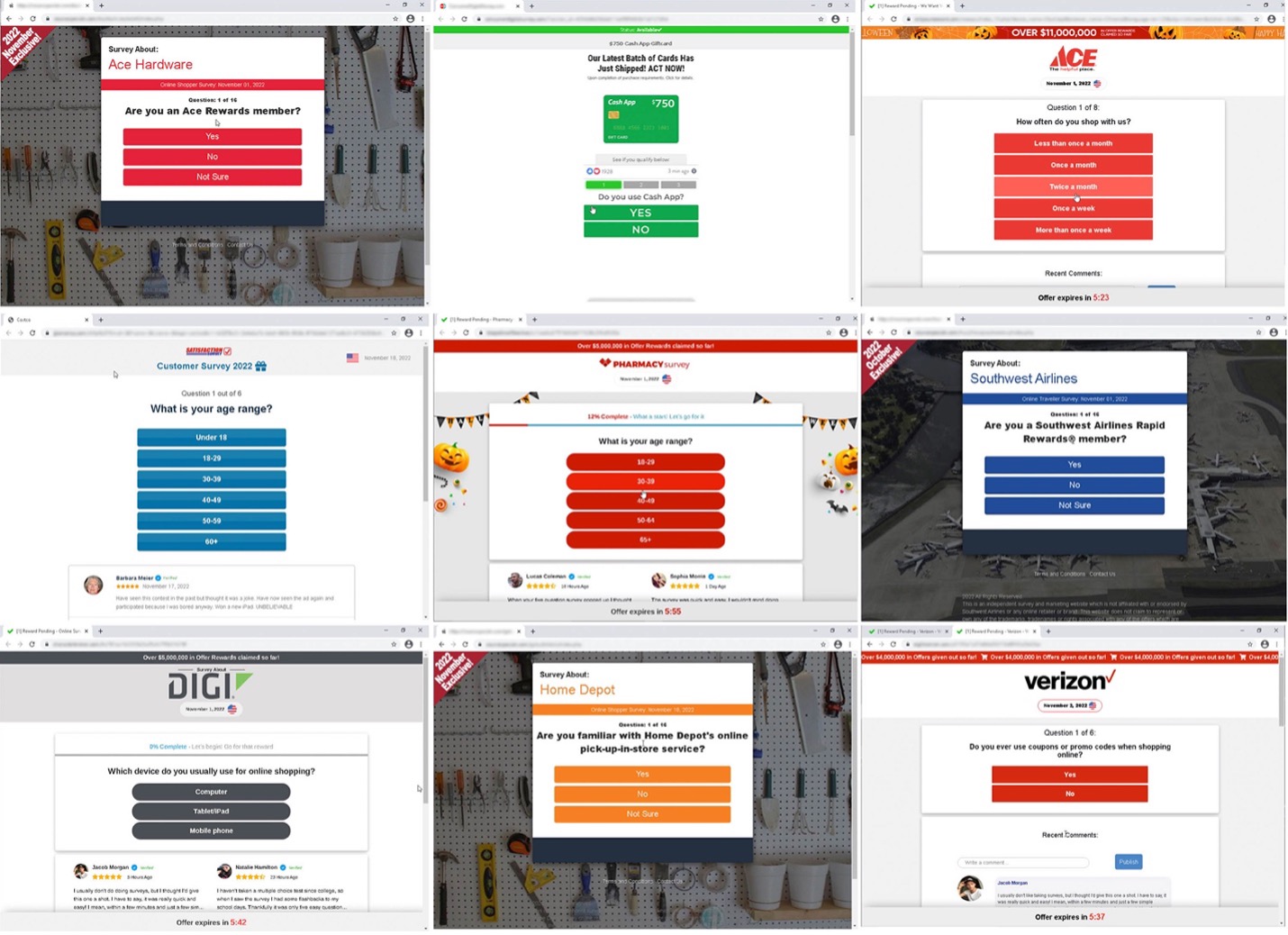 After the survey is completed, these sites offer the choice of a handful of rewards. All the recipient must do is pay for shipping. They are then brought to a page where they can fill out shipping and payment information, and the reward is supposedly shipped.

However, the attempts to make payment often appear to fail, or the recipient is informed that the prize is no longer available. 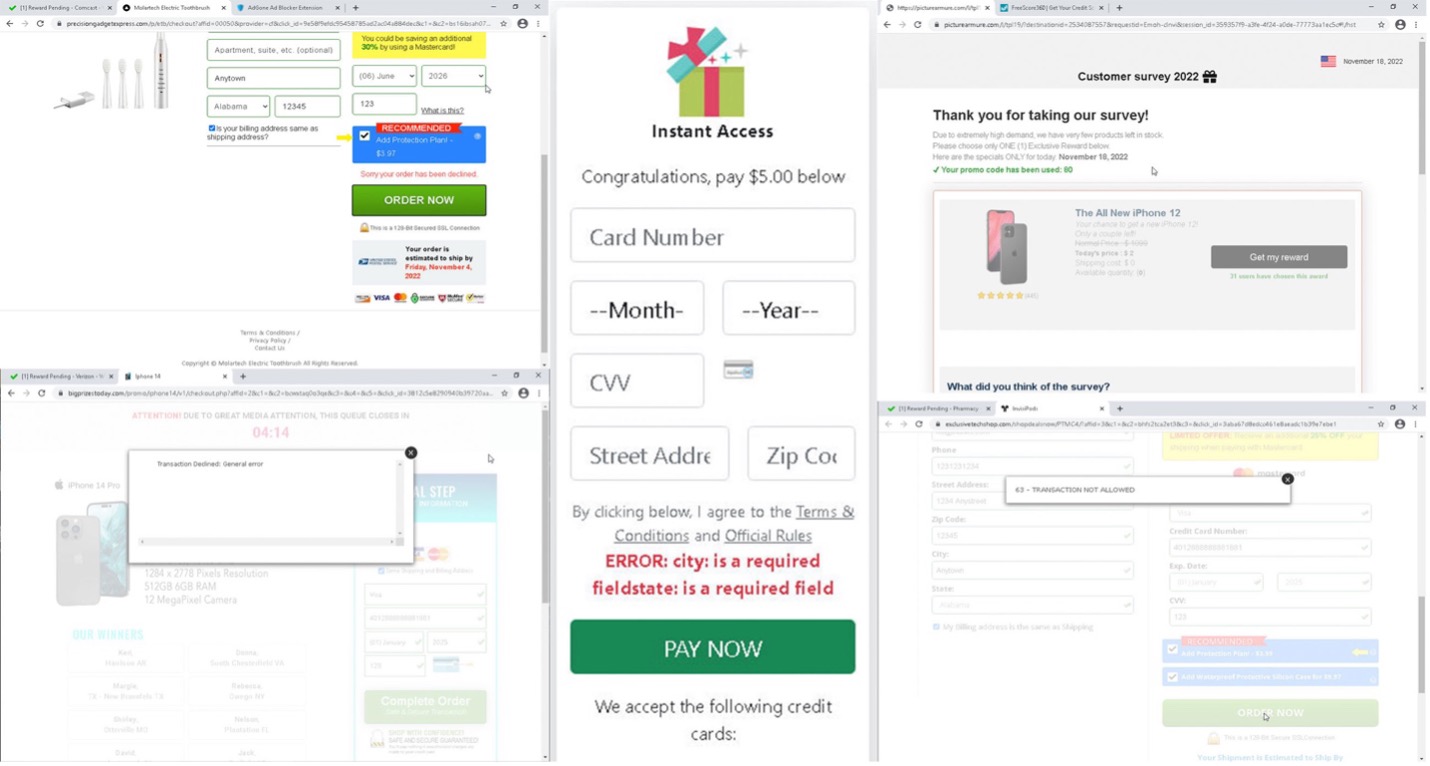 An unsuspecting user may simply give up at this point, disappointed that they won’t be getting their free gift. What they may not be aware of, is that they have just given their credit card details away in a phishing scam.

In their 2021 Internet Crime Report, the Internet Crime Complaint Center (IC3) said that Non-Payment / Non-Delivery scams such as these led to more than $337 million in losses, up from $265 million in 2020. Credit card fraud amounted to $172 million in 2021 and has been climbing continuously at a conservative rate of 15-20 percent since 2019.

According to Cisco Umbrella, many of the sites asking for credit card details are known phishing sites, or worse, host malware. 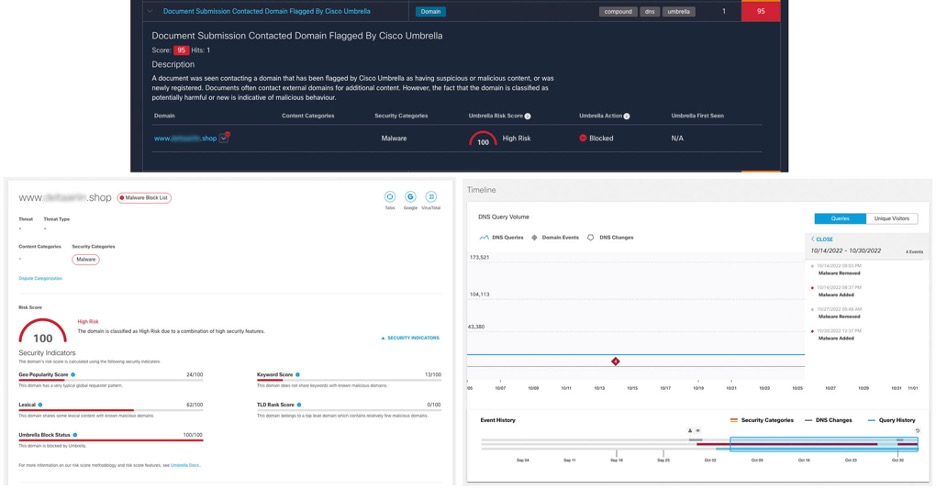 Your package is in route

Another topic that we covered the last time we explored these types of scams was package delivery spam. These continue to circulate today. There are a variety of shipping companies impersonated in these campaigns, and some generic ones as well.

Many of these campaigns claim that a package could not be delivered. If the recipient clicks on a link in an email, they’re brought to a web page that explains that there are outstanding delivery fees that need to be paid.

The recipient is further enticed by suggestions that the package contains a big-ticket item, such as an iPhone or iPad Pro. All the recipient is required to do is enter their credit card details to cover the shipping.

While no outright malicious activity was detected while examining these emails in Secure Malware Analytics, several suspicious behaviors were flagged. Chances are the bad actors behind these campaigns are phishing for credit card details. 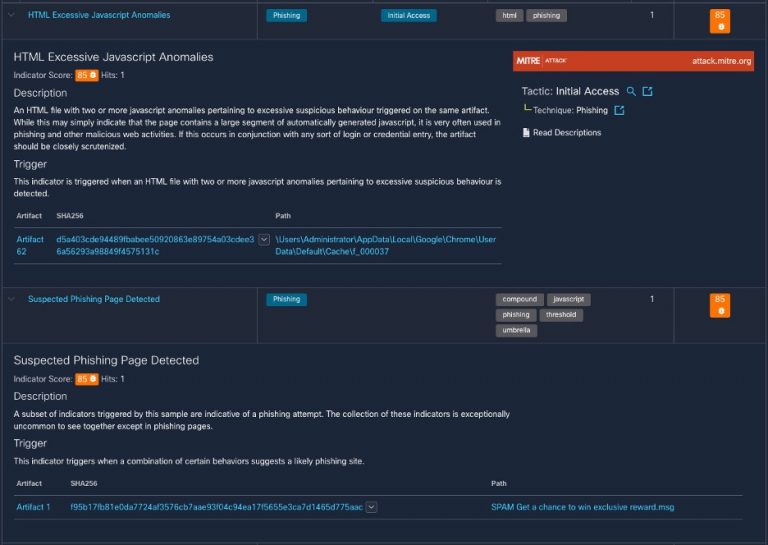 Sometimes the simplest approaches can work just as well as the flashiest. This certainly holds true with spam campaigns, given the prominence of plain-text messages. 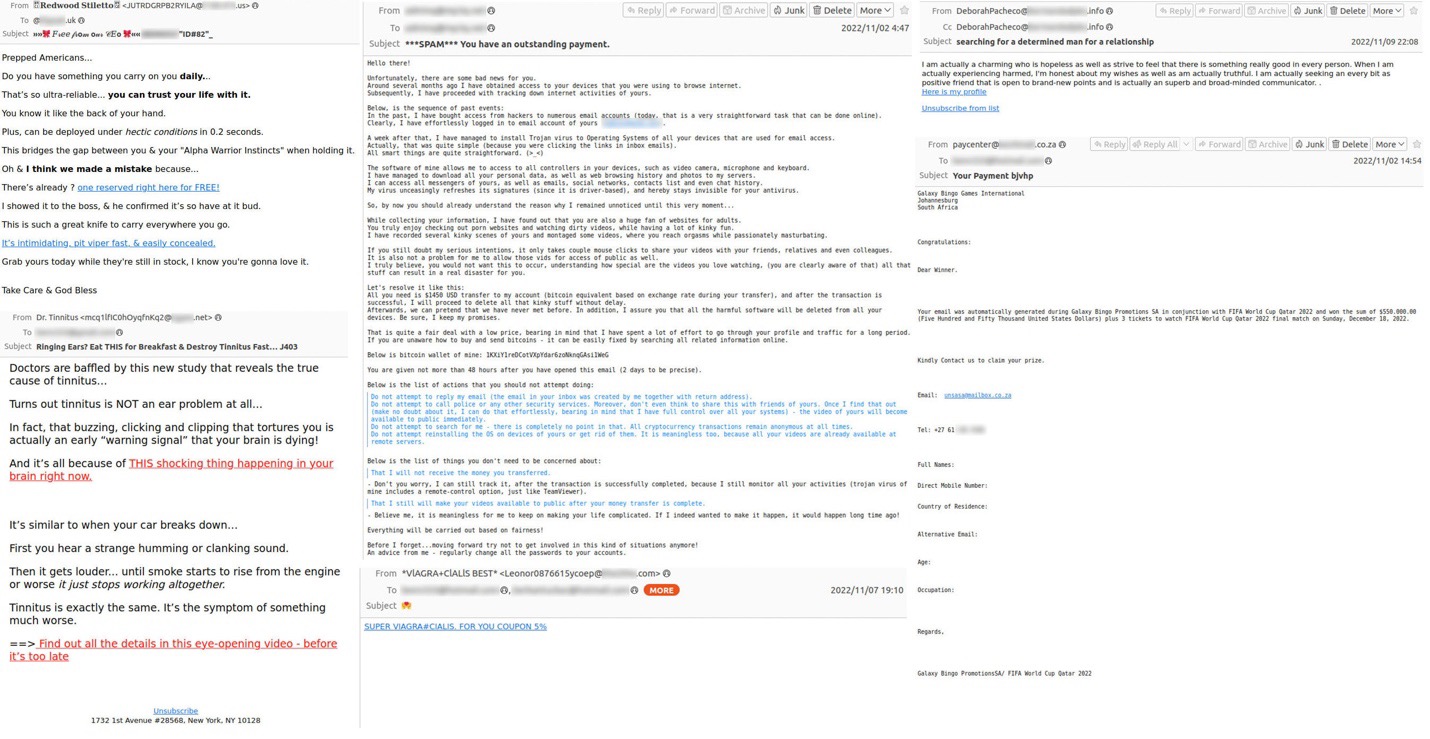 The topics covered in such emails run the gamut, including medical cures, 419 scams, romance and dating, pharmaceuticals, weight loss, and many of the scam types we’ve already covered. Many of these link to phishing sites, though some attempt to establish a dialog with the recipient, tricking them into sending the scammers money.

The IC3 report says that victims of confidence fraud and romance scams lost $956 million collectively, which is up from $600 million in 2020. Healthcare fraud, such as the miracle pills and prescriptions scams, resulted in $7 million in losses in 2021, but nearly $30 million in 2020.  While these types of scams seem generic and easily spotted, they still work, and so it’s important to be aware and avoid them.

Many emails hitting the spam box attempt to trick users of various services into believing that there is a problem with their account. The problems cover all sorts of services, including streaming platforms, email providers, antivirus subscriptions, and even public records. 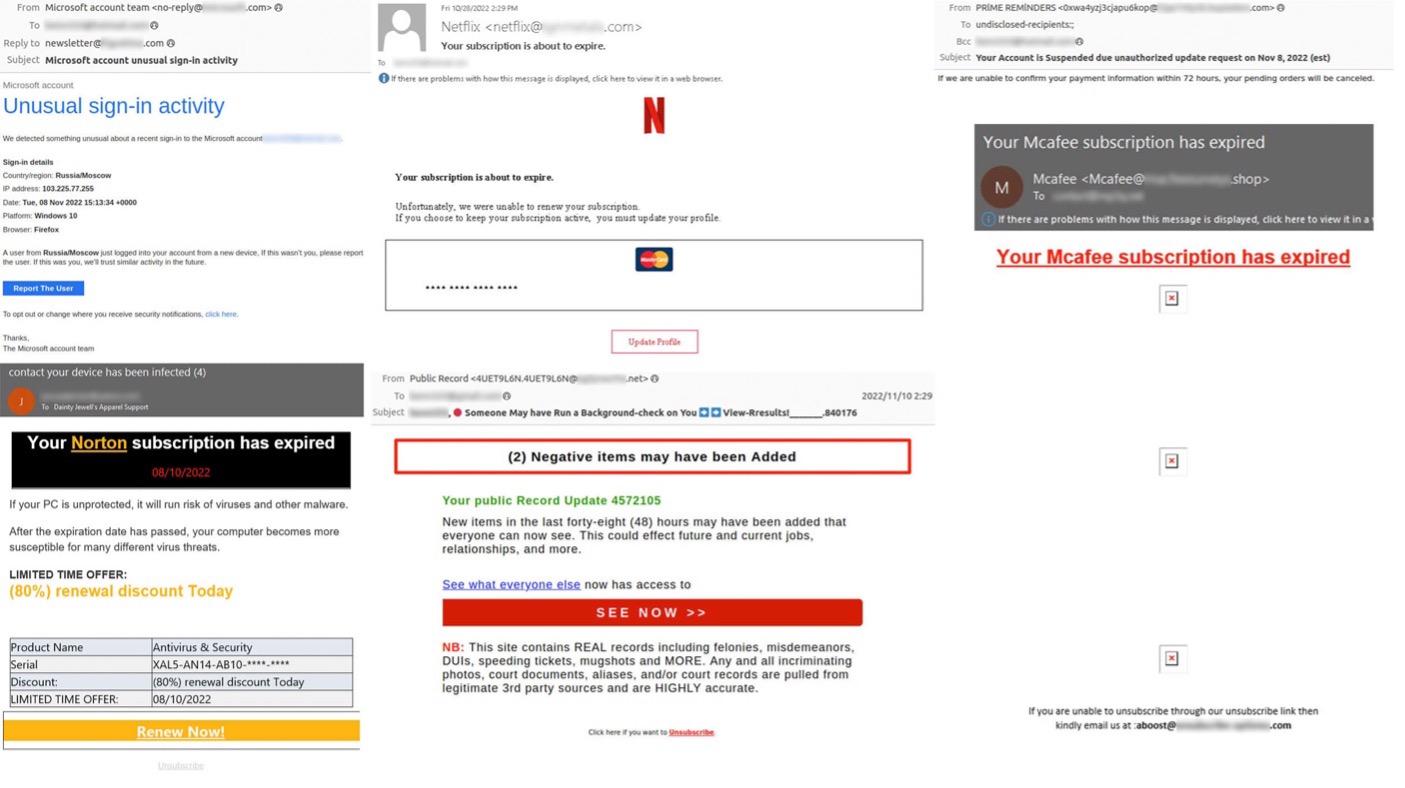 If the links are clicked, the recipient is presented with landing pages that mimic the respective services. Any details that are entered will likely be phished, leading to account takeover and/or access to personal records. However, some domains encountered in these cases may do more than just steal information, they could deliver malware too. 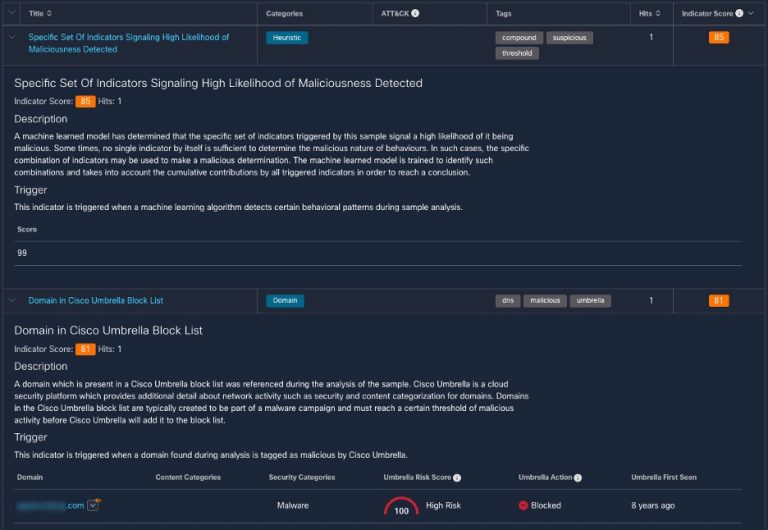 Another frequently encountered scam surrounds billing. Many of these appear to be unexpected bills for services the recipient never purchased.

These emails include attachments that are designed to look like official invoices. Interestingly, most of the attachments that we looked at this time were harmless. The goal is to get the recipient to call what appears to be a toll-free number.

While we haven’t called any of these numbers, the experience usually unfolds like a standard customer service call. In the end the “agents” simply claim the charges—which never existed in the first place—have been removed. Meanwhile the scammers steal any personal or financial information provided during the call.

While most billing scams we encountered played out as described above, a few did indeed contain malware.

In this example, the email appears to come from an internet service provider, informing us that our monthly bill is ready. 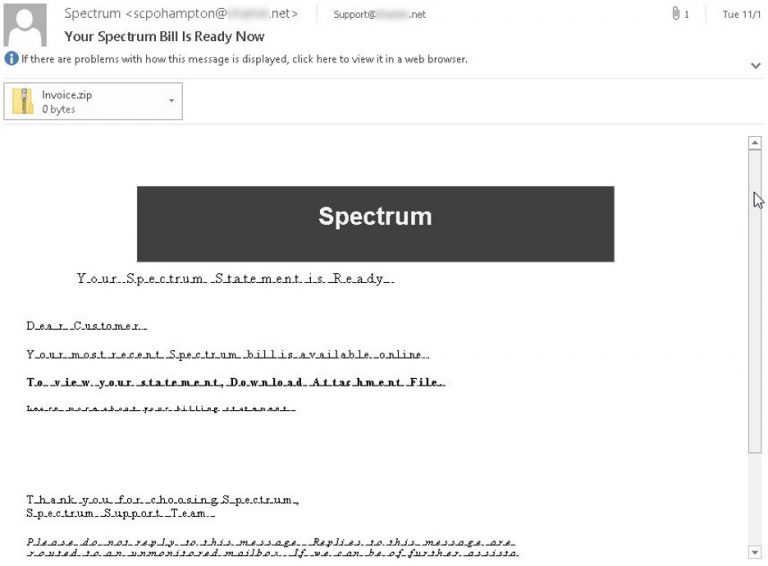 An invoice appears to be attached, stored within a .zip file. If the recipient opens it and double clicks the file within, a command prompt appears. 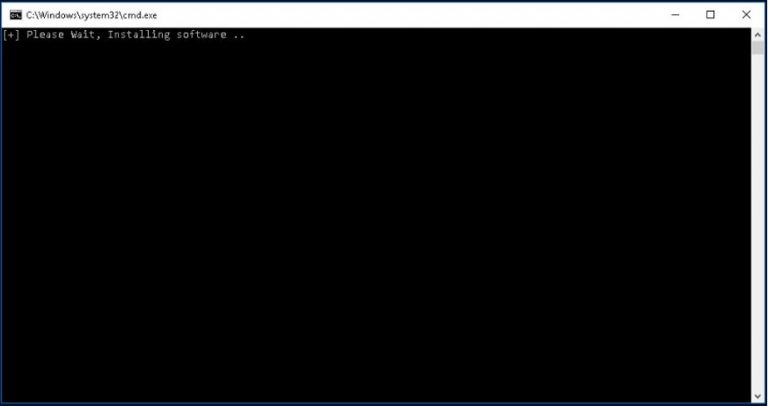 This may seem unusual to the recipient, especially since no invoice appears, but by this point it’s too late. The file contains a script that launches PowerShell and attempts to download a remote file.

While the remote file was no longer available at the time of analysis, there is a high likelihood it was malicious. But even though we were unable to determine its contents, Secure Malware Analytics flagged the script execution as malicious.

Knowing about prevalent scams, especially during the holiday season, is a first step in guarding against them. Granted the bad actors who distribute these spam campaigns do everything they can to make their scams look legitimate.

Fortunately, there are several things that you can do to identify scams and defend against them:

But even the best of us can be fooled, and when overseeing a large operation it’s more a matter of when, rather than if, someone clicks on the wrong link. There are elements of the Cisco Secure portfolio that can help for when the inevitable happens.

Cisco Secure Malware Analytics is the malware analysis and malware threat intelligence engine behind all products across the Cisco Security Architecture. The system delivers enhanced, in-depth, advanced malware analysis and context-rich intelligence to help better understand and fight malware within your environments. Secure Malware Analytics is available as a standalone solution, as a component in other Cisco Security solutions, and through software-as-a-service (SaaS) in the cloud, on-premises, and hybrid delivery models.

Cisco Umbrella unifies multiple security functions in a single cloud service to secure internet access. By enforcing security at the DNS layer, Umbrella blocks requests to malware before a connection is even established—before they reach your network or endpoints. In addition, the secure web gateway logs and inspects all web traffic for greater transparency, control, and protection, while the cloud-delivered firewall helps to block unwanted traffic.

Cisco Secure Endpoint is a single-agent solution that provides comprehensive protection, detection, response, and user access coverage to defend against threats to your endpoints. The SecureX platform is built into Secure Endpoint, as are Extended Detection and Response (XDR) capabilities. With the introduction of Cisco Secure MDR for Endpoint, we have combined Secure Endpoint’s superior capabilities with security operations to create a comprehensive endpoint security solution that dramatically decreases the mean time to detect and respond to threats while offering the highest level of always-on endpoint protection.